I know that you can bowl at basically ever city in the United States, so who really wants to go bowling when you are on vacation? Well my husband and I did, and if there is a Lucky Strike Bowling Alley in your area, you are going to want to go also and check this amazing alley out!

The Lucky Strike that I went to was located at 6801 Hollywood Boulevard, Suite 143 in Hollywood, California. You can also find Lucky Strike Lanes in cities such as Chicago, Illinois, Philadelphia, Pennsylvania, Las Vegas, Nevada, Louisville, Kentucky and quite a few other cities. They have twelve locations in all and are working on expanding to more cities. You will notice the business by the giant neon bowling pin on the building outside.

Walking into the place I wouldn’t have believed it was a bowling alley until I saw the lanes. The place was amazing! There were beautiful hard wood floors right before the lanes and brown plush carpeting where large comfortable couches and small wooden tables were on. The little side tables next to the couches were the shape of an hour glass. Just like bowling balls, they were very trendy! So go now and find out which top bowling ball is the perfect fit for you.

There was somewhere around 15 lanes that you could bowl on. The lanes had lights on them all over the place that made them glow. On each side of the lanes were brick walls with large neon Hollywood signs that had two star burst designs on each side. At the end of each double lane was a large screen that changed from funky shapes, to advertisements, to artwork. They were really neat. I guess there was a private room that you could rent also that had four private lanes in it. 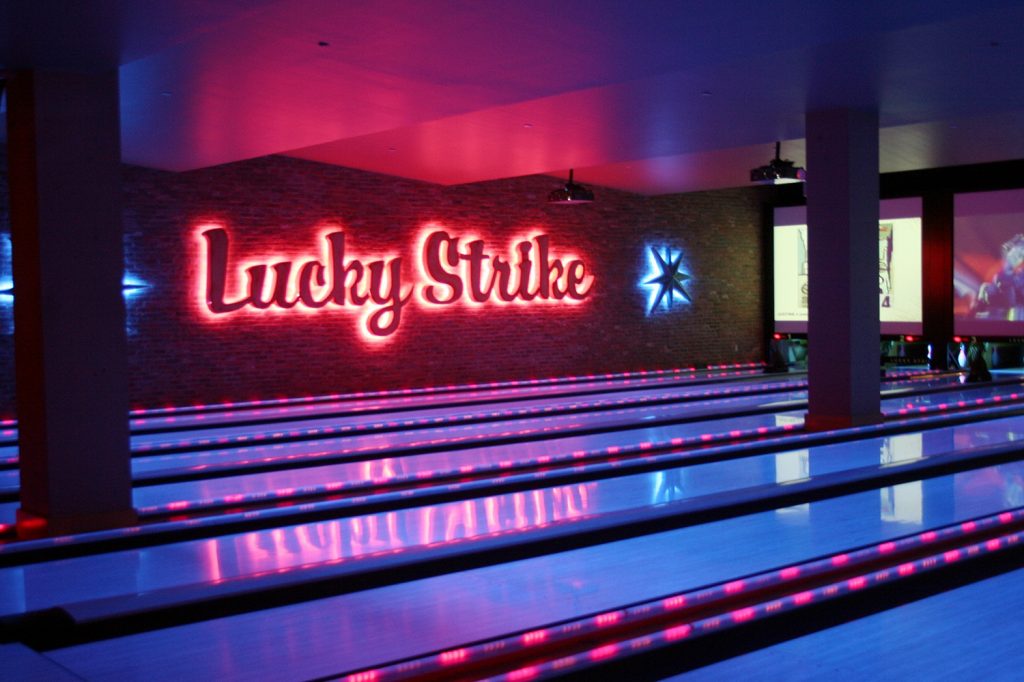 The prices were cheap to bowl also. It was about $6.00 per person per game. Then the shoe rental fee was about $5.00. I thought that was really cheap! In the city in Wisconsin where I live it is just as much to bowl.

Randomly placed between couches and tables, were stylish racks that held twelve bowling balls. They incorporated them in to the decorations and I thought that was really neat. Usually the bowling balls are off in their own little area and hidden from view. But these were out in the middle of everything and it added a cool touch to the area.

Right behind the area where you bowl was a long bar with lots of bar stools. The floor here was a beautiful hard wood floor. The bar was completely made out of a light oak wood and the bar stools were just simple bar stools, but very comfortable. There was also high tables with stools at them situated so that they separated the bar area from the bowling area. So if you didn’t want to bowl, you could sit at these tables and get a great view of your friends bowling or you could watch one of the 6 TV screens that were on.

Then off of the other side of the bar area was the large dining room! It was amazing! There were still the hard wood floors in the area. In the middle of the floor were small tables that sat up to four people. Then along the side of the wall were big half circle booths with high backs on them. They had plush cushions on the seats and the backs.

The dining room served so many great items and it was not your typical bowling alley menu! For appetizers they offered items like skewers, chicken wings, brie, and tomato and cheese s’mores which are a Lucky Strike signature. They also had items like lime shrimp, blue cheese steak salad, burgers, pizza and many other items! Whether you were looking for a nice fancy meal, a quick snack or just a sandwich and fries, Lucky Strike serves it all! And the food is really good. We just ordered the tomato and cheese s’mores to split because we weren’t really that hungry but we had to try those. They were really good.

Then a little bit further back was a very stylish and trendy sitting lounge area. There were funky shaped coffee tables and funky shaped, but very comfortable lounge style rocking chairs. There were also small couches and round chairs that you could relax in. Then facing the alleys was just a long bar type of top and about fifteen stools, so you could watch people bowl from over here. The walls were a deep tone of red with some fun art work on the walls. To complete the relaxing atmosphere, they had candles lit everywhere. 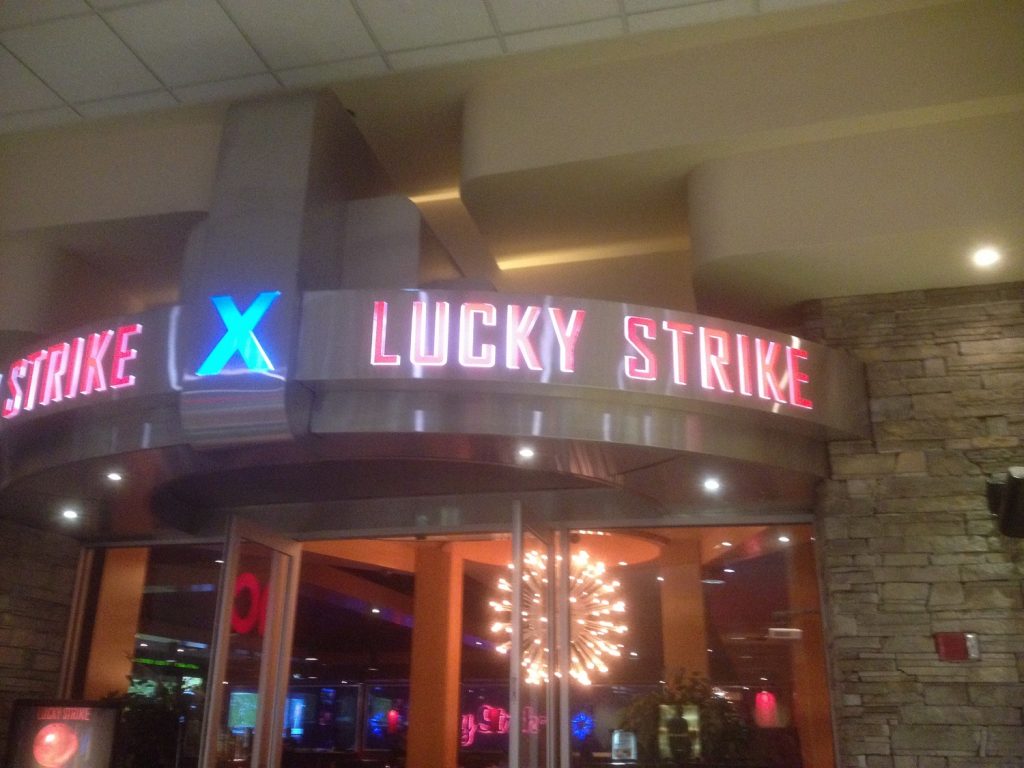 On the walls on one side of the alley, there were giant ceiling to floor black and white pictures. One was of Daffy Duck and one was of the first original Mickey Mouse. It was very cool! Then right next to those was another seating lounge area. This area had two long L shaped light brown shaped couches and a large half square couch. There were also a few lounge style chairs and small wooden tables with plants on them.

The ceiling was in an arc and was made from windows just in that area! It was really cool to look up and see the sky at night! Then along the small white beams that went across the windows, were small spot lights that helped brighten up the room.

Lucky Strike is a crazy and fun bowling alley and nightclub! It was out of this world and like no other bowling alley I have seen before. They do have somewhat of a dress code. They ask you don’t wear baggy clothing, headgear, sleeveless shirts, sweats or sports jerseys or ripped clothes. Otherwise you can wear what you want.

So if you wanted to go and bowl, go and eat, or go and just drink and have a good time, Lucky Strike offers it all in one place. They also have a billiards room if you just feel like playing pool with friends. I highly recommend checking this place out if it is in a city near you! It wasn’t you average every day bowling alley.

Previous Three Easy Tips For Tutoring
Next How Safe Is It To Vape CBD?