“The Dark Knight” Fulfills Its Promise

“The Dark Knight” is a fantastic crime epic that makes for a standout in that genre if not it’s own. It is also accurately named, in a lot of strange ways.

It is the first Batman movie to not have Batman’s name in the title. This is appropriate because Batman is not in it much. But in considering how it is a film more about its villains than its hero, we must not confuse this with the criticism leveled at Tim Burton’s two cracks at the Caped Crusader, wherein the inmates may have taken over the asylum. This is not weirdness for weirdness’ sake; indeed, nothing about this lean, taut movie is for any sake other than the story’s.

Its title is a red herring. The dark knight referred to is not Batman, but the corrupted and destroyed phoenix that rises from the ashes of white knight Harvey Dent, who is in strange ways the true lead character of the film.

And its title also refers to, one might say, the dark night. One of many dark nights to come.

Christopher Nolan’s first entry in the saga, “Batman Begins”, was not the best to come from either the director or the character. It was weighed down by too much, too much backstory, too much wandering, and most of all, too much of everyone involved looking over their shoulder at the genre-destroying “Batman Robin” and vowing not to be that. But not being “Batman Robin”, while admirable, does not constitute being something else.

This Batman movie is something else in more ways than one. 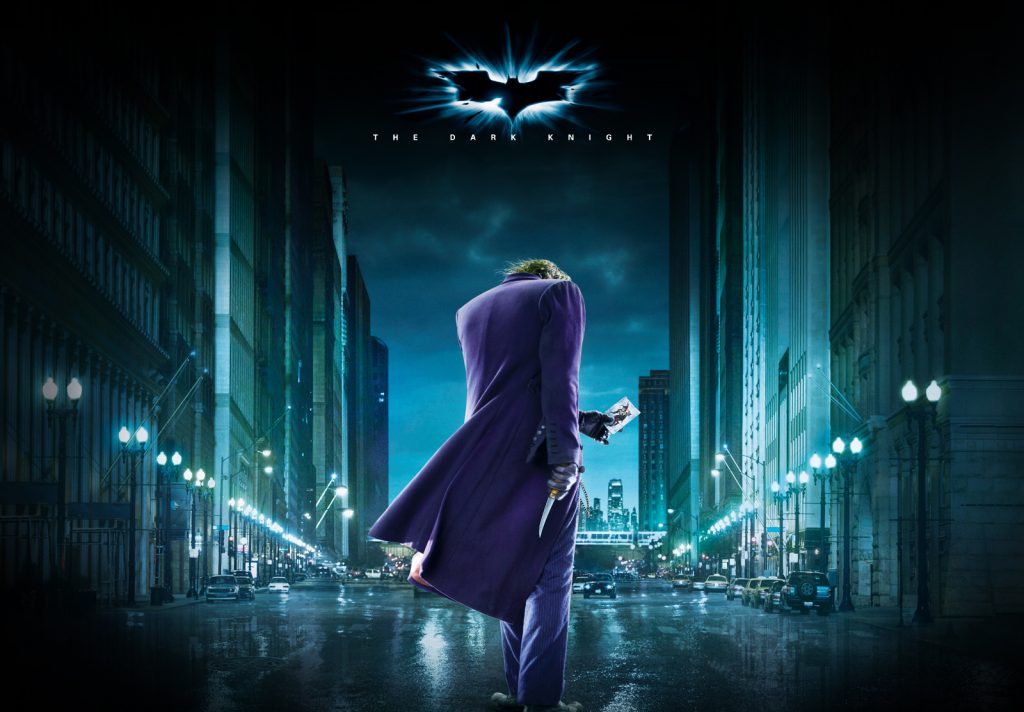 A two-and-a-half-hour movie carrying nary a second without purpose, “The Dark Knight” steps outside the conventions of the superhero film, the noir detective story or the heroic quest, or indeed any of the usual “Batman” tropes, and tells a straight-up cop drama in the post-9/11 age. More novelistic than cinematic in its plotting, in moving his hero almost to the sidelines, Nolan makes this not a story of one man’s quest but of three: Batman, Commissioner Gordon, and the much-believed-in Harvey Dent. These three men each have the vision to save the city and the souls of its inhabitants. The visions and the methods differ madly but share one common thread: all fail.

In Heath Ledger’s much-discussed portrayal of the Joker, we realize before any of our heroes that it is impossible to defeat this man because he does not play the same game as the rest of us. Ledger is barely on screen in his first scene, but when we do get a proper introduction, we are assured instantly that this is a very, very dangerous person with nothing to lose–and perhaps nothing to gain, which is even more unsettling. Batman knows how to stop a criminal, or even bring down a power-hungry madman who wants to rule the world; we’ve seen those movies. But with the Joker, this Joker, there’s nothing to push against, not on those terms.

A terrorist with a manifesto sent by the devil to free a fallen world of its inhibitions, the Joker remembers what was set down about the character in Alan Moore’s seminal “The Killing Joke”: one bad day and anyone could turn to madness. It already happened with him, and, perhaps, with Batman. In “The Dark Knight”, the Joker’s most devious plays are not wreaking destruction himself, but in causing others to do so: in a series of terrifying pieces, ranging from city-wide “social experiments” to shattering personal tragedies between a few people in a dark room, the Joker turns Gotham City into the world he knows it could be.

By the end of the film, every character has been forced to choose what may not be the lesser of two evils. To say that morals are compromised is to rob the bleakness of the film with cutting euphemisms. No one is safe. No one has escaped without losing something. And it is only at the end that Batman is able to do the only thing he’s ever been capable of doing–the right thing, in the wrong way.

The fantastic screenplay is as well-executed as you could ask for. Hans Zimmer, working with James Newton Howard, turns in his best score in years, with his occasional weirdnesses being of actual use here. (They even manage on occasion to turn exactly one note into a leitmotif, which is something of an achievement.) Cinematographer Wally Pfister, still as fine a choice for Batman as you could find, manages to make even broad daylight in Gotham look dangerous as if it’s hiding something.

Christian Bale makes an appropriate cipher as Bruce Wayne. His gravelly Batman voice is at this point unnecessary and does drag the film down a bit. Because the film sidelines its star a bit in favor of the general atmosphere, he actually doesn’t get much to do. Of some note is that the film makes absolutely no reference to Bruce’s obsession or to his parents; of further note is the fact that one suspects an awful lot of the movie could have gone the exact same way had Bruce spent the whole thing in a coma. If indeed the night gets darkest before the dawn, Bale is forced to wait for that dawn, and we must stay with him as he observes and plans his next move.

Heath Ledger is the most complex and layered Batman villain ever put on film, but Aaron Eckhart must be singled out for his own work. Like no less formidable a figure than Barack Obama, he is made to represent and hold up so much–both the character and the actor–and when the character comes to face (so to speak) Harvey Dent’s inevitable destiny, it is more horrifying than you think it will be. And then it just continues. And continues.

There are weak spots, of course. Maggie Gyllenhaal somehow seems wrong for the role of the damsel in distress, although at least she acquits herself far better than the singularly untalented Katie Holmes. A few plot threads are a bit hard to follow if you’re not a huge cop-drama kind of guy. And the Joker’s story is maddeningly unresolved (or did the character plan it that way?)–a few shots to close him out would have been welcomed.

It is not the definitive “Batman” movie, nor does it intend to be; it is the vision of the director of “The Prestige” and “Memento” as applied to the Caped Crusader. Its bold, epic, sweeping story is an as strong entry in the crime drama field as anything by Coppola or Scorsese, and its views on a world struck by terrorism are as relevant as any written about worlds where the bad guys don’t paint their faces like clowns.

But Batman is a legend in the hands of many. This, then, is 2008’s “Batman”, and an excellent one at that. It deserves to be seen; its voice demands to be heard. Besides that, if you are a Fortnite fan you will find Batman’s costume that you can get for your character from the Fortnite item shop today and showcase your Batman love in the game.

Previous An Ultimate Guide To Increase Your Tiktok Followers Easily!
Next How To Stop Your Puppy From Biting Everything!